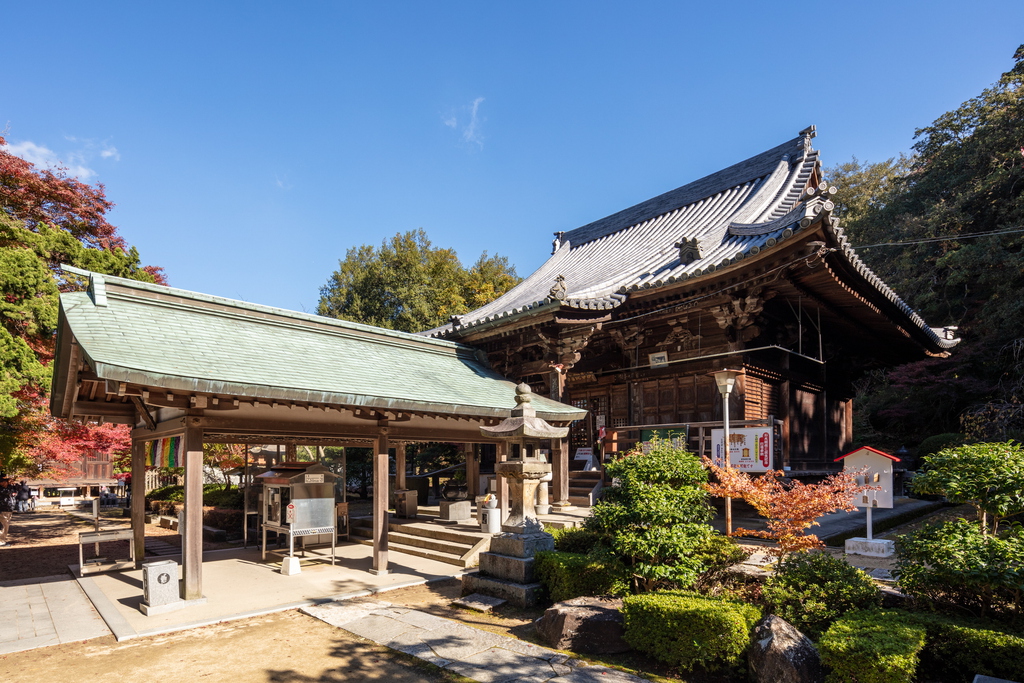 Shiromineji Temple stands on Mt. Shiramine, one of the five peaks of the Goshikidai Plateau, between the cities of Takamatsu and Sakaide. As the 81st temple on the Shikoku 88-Temple Pilgrimage, it receives a steady stream of pilgrims who come to say their prayers at the temple’s many mountainside halls. Six of these buildings, some of which date back to the sixteenth and seventeenth centuries, are dedicated to Buddhas represented by one or several of the 12 animals of the Chinese zodiac. The Buddha corresponding to the year one was born in is considered that person’s protector deity. Small statues are placed in front of the halls to help visitors find the sanctuary that stands for their zodiac sign.

Another interesting structure at Shiromineji is the Tonshoji Hall, which consists of a worship hall (haiden) up front and, behind it, three smaller shrines connected to the worship hall with corridors—a rare architectural solution that is not employed anywhere else in Japan. The sanctuaries on the left and right are dedicated to a Shinto kami and a Buddhist deity respectively, while the one in the middle enshrines Emperor Sutoku (1119–1164), whose defeat in a power struggle at court led to him being exiled to this remote region long ago. Emperor Sutoku died here and is buried in a modest grave next to Shiromineji.

After touring the temple grounds, visitors can walk or drive a few hundred meters back along the road from the Shiromineji entrance to the Shiramine Park Center. The center has a café and a scenic lookout, which offers impressive views over the city of Sakaide, Seto Ohashi Bridge, and the perfectly cone-shaped Mt. Iino, also known as “the Mt. Fuji of Sanuki” (Sanuki being the old name for Kagawa Prefecture). Further up the mountain is Shiramine Onsen, hot springs where the views from the open-air tub rival those of the aforementioned scenic lookout.