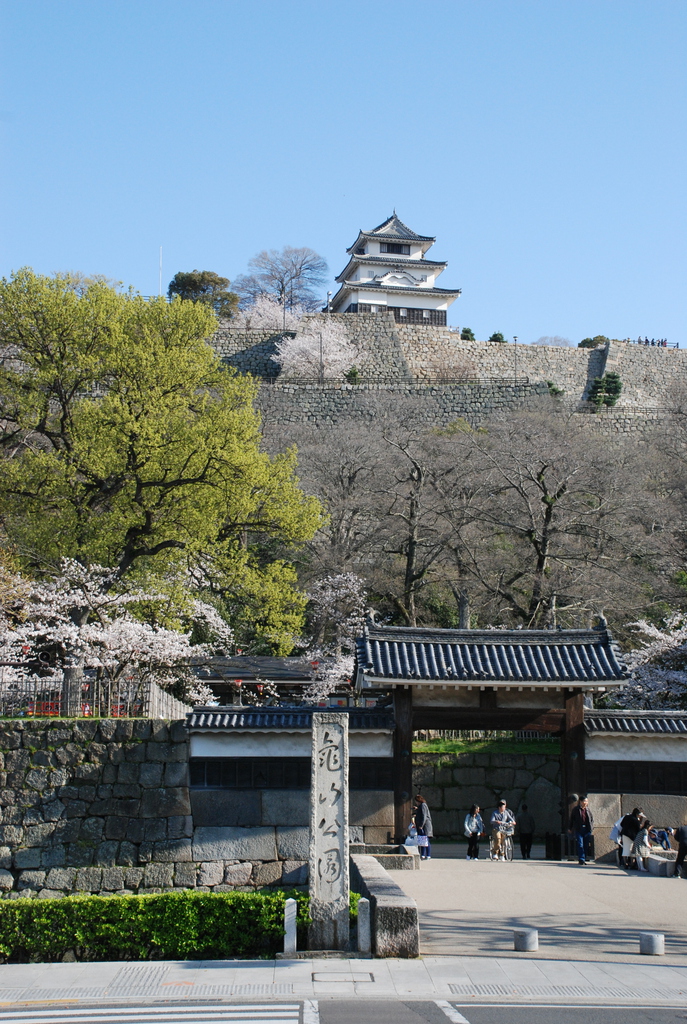 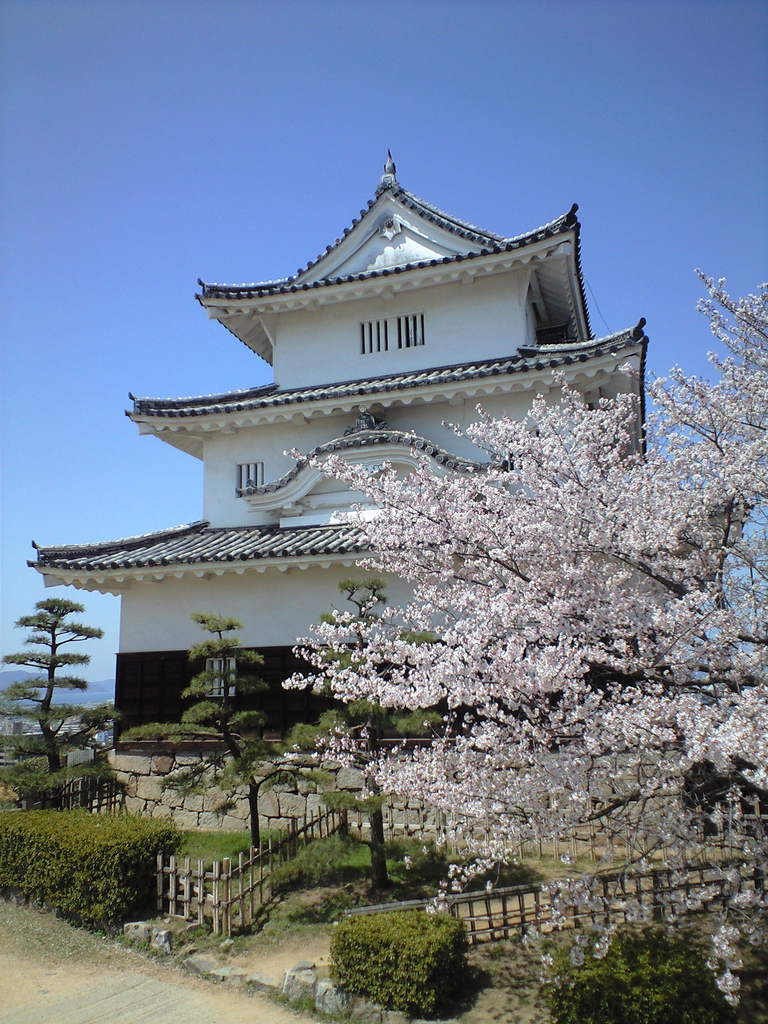 Marugame Castle overlooks the city of Marugame, the largest population center in western Kagawa Prefecture, from a hill called Kameyama. It is one of only 12 castles in Japan with a surviving wooden keep from the Edo period (1603–1867). The original castle was built between 1597 and 1602 by the Ikoma family, lords of Sanuki province (present-day Kagawa Prefecture). It switched hands from one daimyo lord to another and was modified and rebuilt several times over the centuries, notably by the Kyogoku family that controlled it throughout most of the Edo period. The castle was officially decommissioned after the Meiji Restoration of 1868, which ended samurai rule over Japan. Its distinctive three-story keep dates to 1660 and is, at 15 meters high, the smallest of the 12 remaining structures of its kind in the country. The keep, along with the Ote Ichino and Ote Nino gates, is designated an Important Cultural Property. Besides its buildings, the castle is noted for its imposing ramparts, which are thought to have made the fortress extremely difficult to invade. The ramparts, the highest of which measures 22 meters from top to bottom, form four terraces between the inner moat and the keep.

The Ote Ichino Gate on the north side of Marugame Castle was the fortress’s last line of defense. It was intended to stop enemies who had made it past the east-facing Ote Nino Gate and through the masugata, a square between the two gates placed at right angles to each other to slow down attackers. Both gates were built in 1670 by the Kyogoku family, which controlled the castle at the time and sought to reinforce its defenses. The castle entrance originally faced south, but the Kyogoku moved it to the opposite side and constructed the twin gates to complement the high stone walls of the fortress, which had already made it extremely difficult to storm. The two gates, along with the castle’s wooden keep, have been designated Important Cultural Properties.

The roof of the gate is decorated with onigawara tiles and shachihoko sculptures on both ends. The former are ornaments that depict the fierce face of an ogre (oni), believed to scare away demons and evil spirits, while the latter are fish-shaped figures that were thought to protect a structure from fire by spraying water from their mouths. The two-story interior of the gate, which is open to visitors, is distinguished by its six brattices, or alcoves with removable floorboards. These were features designed for use by defenders to shoot or throw objects at enemies below. Ote Ichino is also referred to as Taikomon (“drum gate”), because the castle lord’s retainers would beat drums within the gate to announce the time. This practice was revived in 2006, and drums are now used to announce noon from the gate every day.

200 yen for adults, 100 yen for children (elementary and junior high school students), free for persons with physical and mental impairments (children) and their caregivers