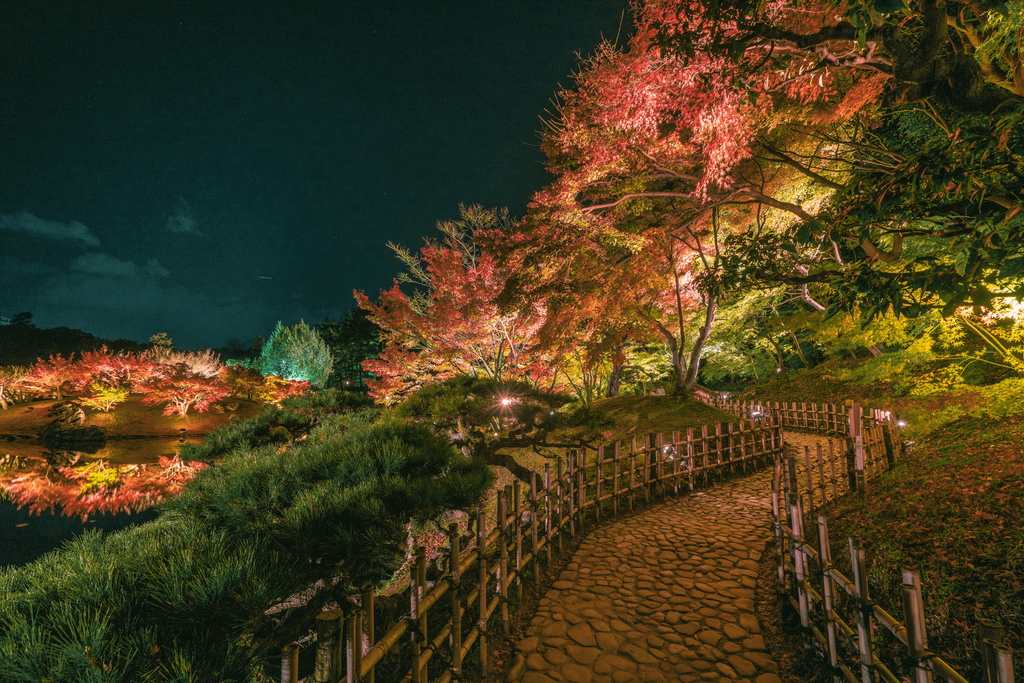 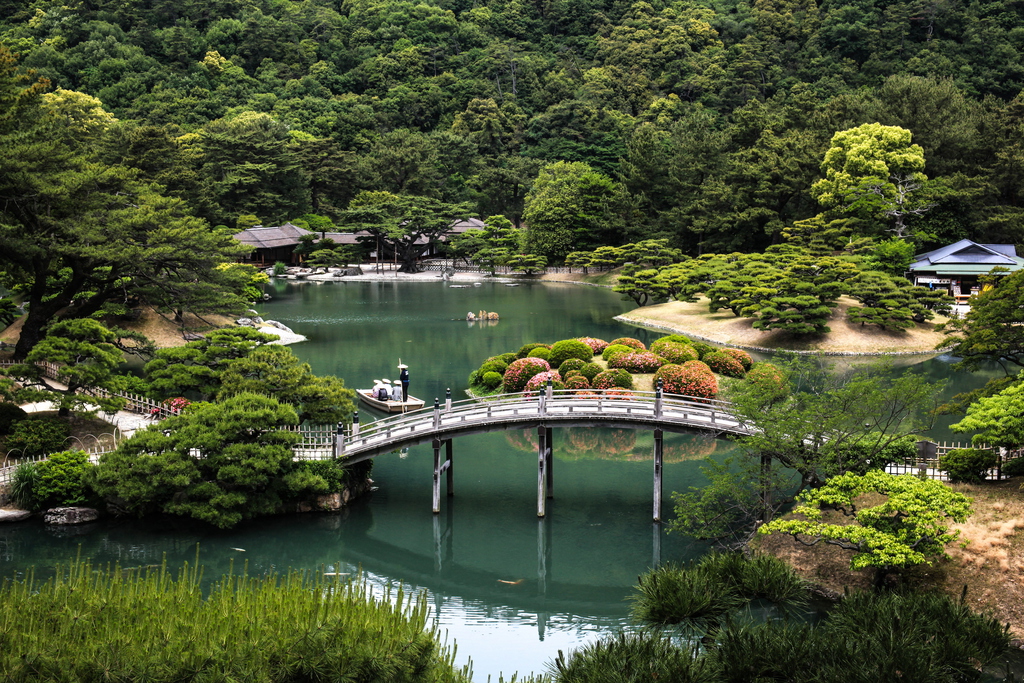 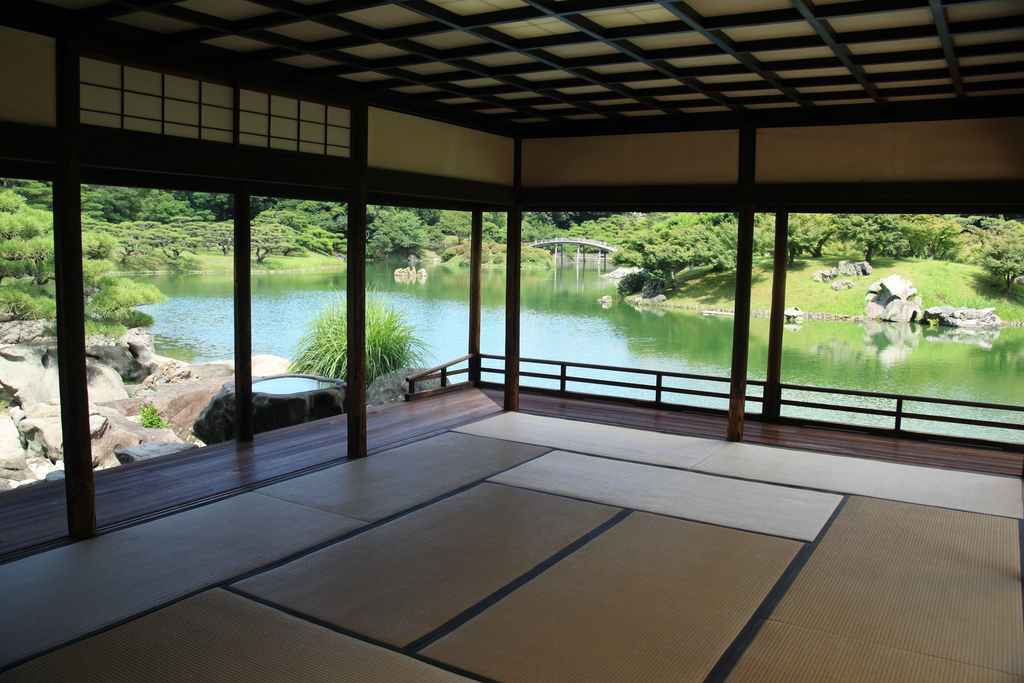 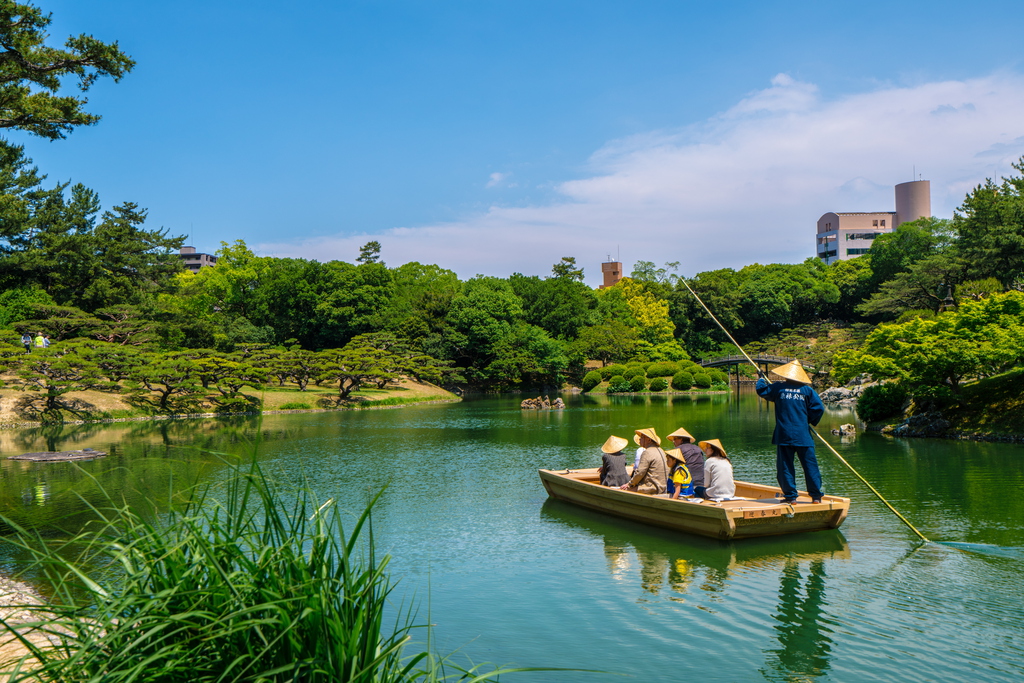 History of Ritsurin Garden.
Ritsurin Garden was originally a part of the estate of the Matsudaira family, the lords of the Takamatsu domain, who inherited its site from the Ikoma family, rulers of Sanuki province (present-day Kagawa Prefecture). First constructed in 1642, the garden was maintained and enjoyed by the Matsudaira over more than 200 years until 1868. Following the Meiji Restoration of that year, the system of domains ruled by the shogunate (warrior-led government) was replaced with a Western-style centralized government and the Matsudaira lost their status as lords. Ritsurin Garden was turned into a park and opened to the public in 1875. A symbol of Takamatsu and one of the city’s most popular sights, Ritsurin is now recognized as one of the best-preserved Edo-period (1603–1867) gardens in Japan.

The garden was built in the kaiyu or stroll garden style, popular among high-ranking samurai during the Edo period, and features a series of carefully composed views that the visitor can admire in succession while walking through the garden. At Ritsurin, many of these views focus on a pond or small hill. The garden has approximately 1,400 pine trees, and artistically placed rocks dot the grounds. Another distinctive feature is the use of shakkei (“borrowed scenery”), a technique of garden design that takes advantage of natural features outside the garden to create a sense of expanse. At Ritsurin this background is provided by Mt. Shiun to the west, which appears to be towering over the garden when seen from certain angles. One such view can be taken in from Hiraiho Hill.

Ritsurin Garden consists of the original daimyo garden, or South Garden, and the North Garden, built in the Meiji era (1868–1912). It can take up to two hours to tour the vast grounds in their entirety, and visitors can enjoy different aspects of the scenery in every season. The cherry blossoms in spring and the red and yellow foliage in autumn in particular attract numerous visitors.

The Kikugetsutei Teahouse and the artificial Hiraiho Hill are two of the most scenic viewpoints in Ritsurin Garden. The former is a thatched-roof structure that dates from the early 1600s and was used by the daimyo lords of the Takamatsu domain, who built the garden during the Edo period (1603–1867). This teahouse stands near the South Pond and is distinguished by its four facades, built so that it could be entered from all directions. From the tatami-mat floor of the Kikugetsu no Ma, the room closest to the pond, the view of the water from a certain angle creates an impression of floating on the surface. In addition to offering carefully devised views in every direction, Kikugetsutei’s low ceiling and few walls make the teahouse a pleasantly cool place in summer. Its ground-level perspective contrasts with that of Hiraiho Hill, the highest point in the garden, on the east side of the South Pond. Shaped to resemble Mt. Fuji, it offers views over the pond, the arched Engetsukyo (“crescent moon”) Bridge, Kikugetsutei, and beyond, where Mt. Shiun looms up in the background. This vista is occasionally complemented by an old-style pleasure boat gliding across the pond.

410 yen for adults, 170 yen for children (elementary and junior high school students), free for preschoolers
*Free for all on New Year's Day and the park's anniversary (March 16)